Parking: In Otterton there is some roadside parking in Fore Street, near the Kings Arms at ‘A’, (What3Words Ref. ///numeral.window.acquaint ) (OS Grid Ref. SY 081 852)
Amenities: Otterton Mill, The Kings Arms

The Walk: With the River Otter behind you, follow the road for 300m beyond the Kings Arms, turning at the junction into Bell Street. After 260m, fork right into Stantyway Road, walking uphill to the junction by Stantyway Farm, 450m, ‘B’. Take the second track on the left and then, where the track bears left, look for the footpath on you right. Follow this and enter the field, ‘C’, with great views of Ladram Bay and further east, Lyme Bay. Keeping the hedge on your right, walk to the corner of the field and join the SW Coastal Path. Turn right.

Follow the Coastal Path for about one mile (1.7 Km) to Brandy Head at ‘D’; it derives its name from the smuggling activities, that were once commonplace along this coast. Later, after passing through a small gate, you will arrive at the Brandy Head Observation Hut, a wartime relic, now refurbished; it was a gun
testing facility operated by the RAF.

Continue along the path for another mile, until it turns sharp right, where it meets the Otter Estuary at ‘E’, where there is a ‘bat hotel’, occupying a disused pillbox. Now with the Otter Estuary on your left, follow the path through the kissing gate (by the South Farm gate) at ‘F’ and then bear left to follow the road to the bridge over the River Otter. Once over the bridge, at ‘G’, turn right and follow the riverside path for 1.4 miles (2.35 Km) until the road into Otterton is reached, at ‘H’.

Turn right, cross the bridge with care and continue along Fore Street to complete the walk. 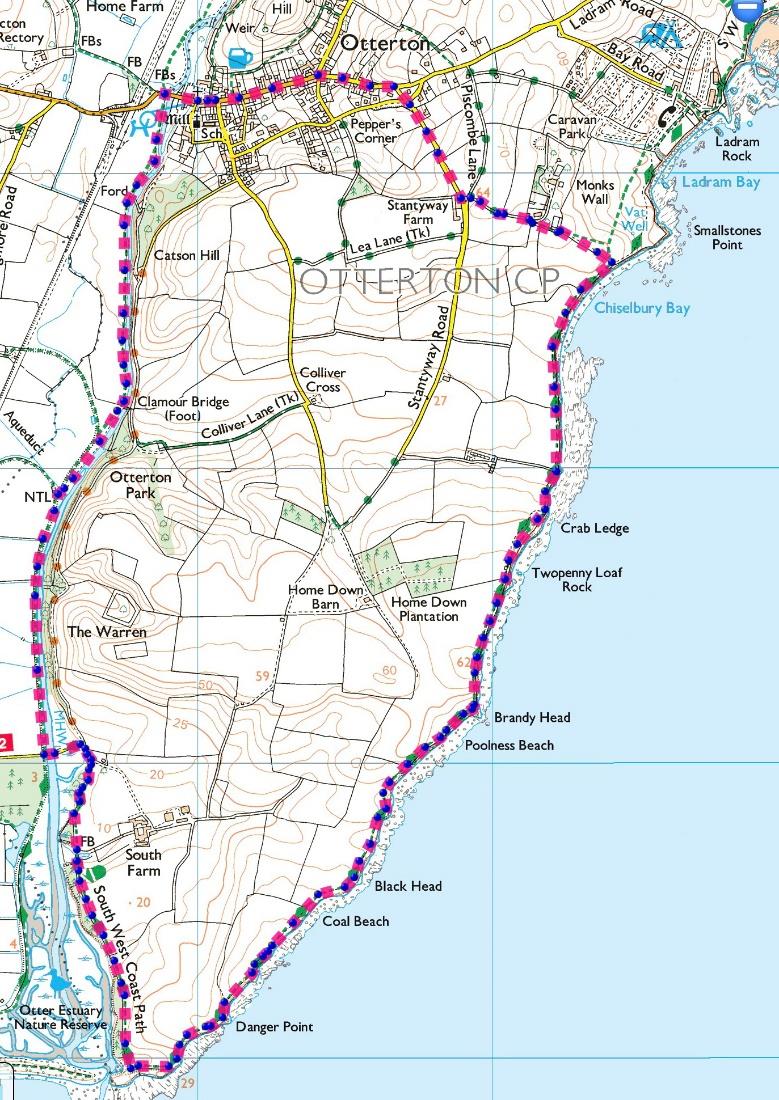 Great christmas night out at the Cridford Inn. Barney the Chef did us proud 21 of us and everyone said it was fab.Ness and Karen running around after us all making sure we all had enough and keeping an eye on our drinks.The table was looked fab too ....will go back again and again thank you Ness and Paul.

Fantastic family Sunday lunch. We ate here today as two families. The staff were very welcoming and helpful and the food was lovely. Would definitely recommend this place.

Our hosts were very welcoming, helpful and made our 2 night stay more than pleasurable. The food is exceptional and there is a wide choice of beer, wine and spirits. Overall our stay was excellent and the atmosphere in this beamed establishment very relaxing, we will visit again for sure

We had an excellent lunch in this delightful inn, which is packed full of character. Would definitely recommend a visit here. They have an amazing range of spirits and local ales. Although we did not stay overnight, the rooms look very comfortable and well equipped.